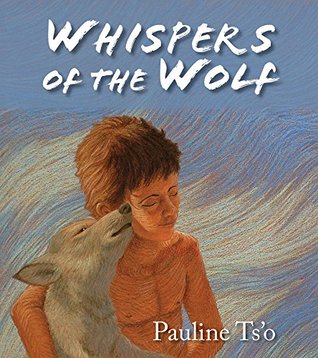 Whispers of the Wolf written and illustrated by Pauline T’so

From Goodreads: Ahrooooooo” went the cry. It was the call of the wolf pack. A young boy named Two Birds heard it, and so did his wolf. Two Birds had found the abandoned wolf pup, and they had grown up together. Now, the wild was calling, and Two Birds had a choice to make. Struggling with a mix of emotions, he must decide whether his love for the wolf is greater than his need to be near it. Will Two Birds learn to let go not just of the wolf, but also of his own fears?

I do appreciate that this is intended as a historical story as opposed to some made up Pueblo folktale. However, T’so never names what pueblo the boy is part of. Debbie Reese has talked a lot about the importance of identifying a specific group when sharing stories of Native Nations because it fights the stereotype of the pan-Indian (it’s also for accuracy’s sake). Even in the notes at the back of the book there is little specificity.

It’s a good story about making friends and how that can be hard. The illustrations are nice with lots of textural lines and alternating warm and cool color palettes. The beginning of the story is a little disjointed, but comes together nicely. The conclusion is a bittersweet goodbye to the wolf pup Two Birds has raised.

I worry that the relationship between the boy and his wolf leans a little close to the Magical Indian trope. He hears the wolf whispering thoughts and stories to him throughout the story. The stories he shares with the other boys in his pueblo. I think it was meant as more of device for Two Birds to make friends and emphasize his special relationship with the wolf, but I still think you could argue it veers off into trope territory.

Finally I wonder about their clothing. It’s just a loin cloth seen on the boys. I have no idea if that is accurate or not. So many stereotyped images of Native Americans inaccurately show them wearing very little clothing (often despite cool climates). It gets to the idea of the savage Indian that is so uncivilized they don’t even wear clothing. When I see images, like those of Two Birds, I worry they are unintentionally (or intentionally) tapping into that idea.

There is a forward from a woman who is from Santa Clara Pueblo. She enjoyed the story and its depiction of the Pueblo boy. There are some fairly good notes at the back with some suggested further reading. In looking more at those books, I’m not overly impressed. I know there isn’t a lot out there that is good, but these all look like standard fair when it comes to children’s nonfiction and I am still really leery of children’s nonfiction. One of the books is about running and I believe the author’s first name is incorrect- it should be Peter not Frank. There are two folktale books that are written by cultural insiders. I’m not sure I would send children to these resources, though.

I don’t know about this one. We really need quality books about Native Nations on our shelves and I’m just not convinced this one fits the bill. It might if there was going to be some instruction and critical reading of it in the classroom. Might. I think I’ll keep this in mind, but not purchase just yet.