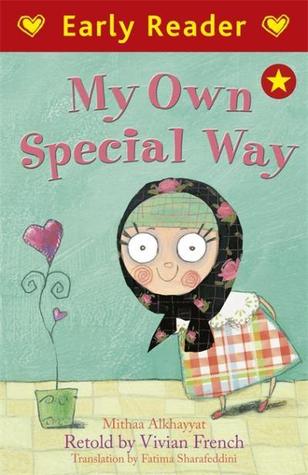 My Own Special Way written by Maitha al-Khayat, translated by Vivian French, illustrated by Maya Fidawi

From Goodreads: Hamda has just become big enough to start wearing her veil like her older sisters. Each sister chips in with her own suggestions based on what worked for her. But it is up to Hamda to work out her own unique way to wear the veil making it a part of her active and happy life.

This is a gentle little family story about Hamda growing up and finding her place. It just so happens that for Hamada and her family, that means wearing hijab. It’s also a story about ingenuity. Hamada has to find a way that works for her to put the hijab on and keep it on.

Hamda is a funny and determined little girl who wants to be a “big girl”. She’s the youngest in the family and is finally tired of being told she’s too little to join her sisters in their activities. I think as parents and teachers we all know a couple of those. After a little pep talk with her mother, Hamda realizes part of becoming a big girl is deciding to wear the veil. And here is where this book gets very important for American audiences. This is not something Hamda is being forced to wear nor are her sisters, but it is a really big deal for the family. They are exceedingly proud that Hamda has recognized the step that choosing to wear hijab is and feels ready.

Except putting the scarf on and keeping it on as Hamda frolics turns out to be much harder than Hamda thought it would be. Each sister shows her how she wraps the scarf, but none of their ways work for Hamda. When Hamda goes down to say goodbye to her father before he heads out to the mosque she notices his cufflinks and this gives her an idea for her problem. It’s a bit Goldilocks, a bit Rosie Revere (or any of those inspired girl books).

The one thing I can’t decide about is the fact that religion is not mentioned in relation to the hijab. I suspect this is because the book was originally published in Arabic for a Muslim and/or Arab audience that would have assumed the characters were Muslim or at least understood where the tradition comes from. I don’t think it will be confusing for American children unfamiliar with Islamic practices, but I do think it will be important to point out that they are Muslim so the connection is made with average families and Islam. I found it rather refreshing that they weren’t overly or overtly religious. Not all Muslims are, just as not all Christian are, so I think it’s only fair to show them being Muslim in a range of ways just as Christians are in children’s books.

From a purely reading level perspective this is a worthwhile book to have on the shelf . It is certainly an easy reader in that it has large font, repetitive text, and is fairly short. But it has chapters and a story that carries across those chapters, so in a lot of ways if feels like a beginning chapter book instead of an easy reader.

A few words about the illustrations. They are, as you can see from the cover, quite adorable. Each page has at least one spot illustration and quite a few illustrations spread across the bottom of two pages or are full bleed across the spreads. It’s just another way that the book helps those emerging readers. Hamda is absolutely adorable with her secret smile and curly hair. She looks a bit mischievous, actually. Her mother has some wild red hair and her sisters are all lovely girls, but Hamda steals the show. The pictures are all in a more pastel palette, but they manage to be bright and inviting. Try not to laugh when Hamda tries (and fails) to copy her fashionable sister Jamila (which means beautiful in Arabic). The result of her tying scarfs together looks striking on Jamila and just plain funny on Hamda. I tested the book out on my daughter and she loved the story (we read it several times over the following days), but I think she really clicked with the illustrations and Hamda.

I don’t think this is technically a small press publication, but it was originally put out in Arabic (in the Emirates) and was then translated and brought over to the UK market (as far as I can tell), so I fudged it. 🙂 I cannot recommend My Own Special Way enough for all library and classroom collections that have easy readers and early chapter books. It’s a gentle little family story that shows a side of Islam and Arabs we don’t normally see. It’s also a perfect transitional book for kids moving from easy readers into chapters or for those kids that want to look like they’re a big kid reading a chapter book.