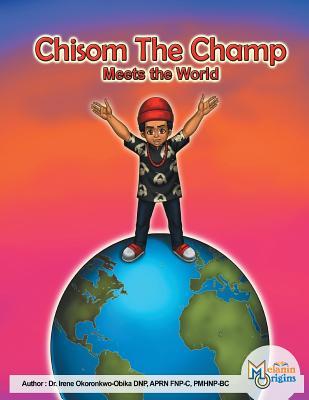 From Goodreads: Enter into the life of Chisom, a young Nigerian boy, who repeatedly gets bullied for his cultural identity in a Western Society. Read along as he discovers that his strength is actually found in his family upbringing and in embracing his cultural values. The story of Chisom teaches children across the world that self-love is key to overcoming bullies and other interpersonal obstacles experienced in life’s journey.

Disclosure: I was sent a copy of the book by the publisher Melanin Origins in exchange for an honest review.

Where was this book a year ago when I was building the character education collection in the library? This was exactly the kind of book that we needed! It tackles bullying, cultural and self pride, and standing up for yourself and others.

Chisom appears to be growing up in the United States, but he makes it clear that his family is Igbo and shares some of his culture with the reader. His name has cultural significance, his parents are called by the traditional naming convention, Papa and Mama Chisom. Mama Chisom is apparently a good cook and, darn it, every book about Nigerian families features jollof rice and it makes me hungry every time. Chisom also wears traditional Igbo clothes, which eventually gets him in trouble with the school bully.

Billy Bob is a large red-headed boy who wears cowboy boots and teases everyone. He decides to start picking on Chisom calling him names and making fun of his clothing. Chisom is, understandably, really upset by this. After talking to his mom about it and reflecting on the pride his parents instilled in him he decides to stand up to the bully. The next day at school when Billy Bob starts in on Chisom, he tells Billy Bob to stop and explains that Billy Bob’s cowboy boots set him apart as much as Chisom’s Isiagu. He tells Billy Bob that everyone deserves respect and then, best of all, calls him in asking him to be a champion by giving up bullying.

The book is clearly made to encourage children to stand up for what is right. Chisom is a sweet boy with a loving and supportive family and he makes a great character for kids to connect with and root for. Certainly the book is important for all children to show that just because we look and dress differently doesn’t mean we deserve to be bullied. But I think this book is most important for children from immigrant families and black children who are often not allowed to feel pride in their heritage and families. Moreover, the book provides a good jumping off point for teachers and parents to talk about how to stand up for yourself and others. I think there are a lot of children out there that want to stand up to bullying and teasing, but don’t know where to start. Chisom gives them some good ideas, particularly the importance of calling people in (instead of simply calling them out) and language around those ideas. The ending may involve a bit of wish fulfillment, but it’s good for kids to see happy endings to these situations so they can keep a positive mindset.

Pair this with the charming The Smallest Girl in the Smallest Grade by Justin Roberts, Red by Jan de Kinder for a storytime about standing up against bullying. Well worth adding to school library collections, particularly if you have a character education curriculum or anti-bullying campaign. Also well worth adding to classroom libraries for those first few weeks when you work on building community.

On IndieBound: paperback and hardback

On Amazon as an ebook.

Final note: If you do purchase this book, please post a review of it on Amazon. This will help other folks find the book and know that it’s worth purchasing. If you use any other book services like GoodReads or your local library’s online catalog be sure to post a review there too! And if your local library doesn’t have a copy, request that they purchase one.